Girlfriend turns her boyfriend into her girlfriend

It all started a few years ago. I was dating a girl who was bisexual. So much so that she wanted me
dressed as a woman for sex. To begin with I was not sure, but eventually I came round to the idea. It
was mainly just some lipstick and perfume. After a few months we split up, but I continued to dress
up.
One day I decided to venture out as a woman. I lay in bed thinking what I should wear. I showered,
shaved my legs and under arms. I had decided to wear a pair of black satin panties, a black satin
boned corset and stockings, leather trousers and a black satin blouse. I fixed faulse nails on, then put
my make up on, fixed my auburn wig then put on my knee high boots. Picked up my jacket then took
a deep breath and went out the door for the first time as Annabell.
It took around 20 minutes to get to the shops. I parked the car and went to the department store. I
began looking at the skirts and dresses. I decided to buy a trouser suit and jacked, and a white shirt.
Then it was on to the lingerie. I felt like a kid in a sweet shop. Pinks, reds, ivory, blacks, all soo nice
and girly. I picked up a pink satin set. The bra was pink satin with lace around the cups, the knickers
matching. As I put them in the basket I felt a hand on my shoulder, and a voice saying “i think you
need some help with those madam”. It was my ex girlfriends mum, she didnt know of my secret but
now she had seen me. I bought the underwear, and we went for a coffee to talk. Ibroke down in tears
and told her I felt the true me when I was Annabell. She didnt say a word untill I finished telling her
what it felt like to me to be Annabell. Then she said, we need to go to the restroom. This was a first
for me. We went in, and she pulled me into the same cubical, sat me down. Then she slapped me,
hard. Then told me that I was to be her sissy lover. From now on I was to live my life as Annabell.
We went to quite a few other shops, buying skirts, dresses, underwear, shoes, boots make up, etc.
After a long shopping spree we went back to her place. We sat in silence as we looked at all the
things she had helped me buy. Then I had to give her a fashion show. The first thing I had to wear for
her was the pvc catsuit, gloves and boots. I felt soo good, sexy, femanine, free and happy. When I
came out of the bedroom she was wearing the same outfit but with a strap on. As I was feeling
naughty I got down on my knees and slowly began to lick the rubber shaft from the tip to the end,
then began taking it into my mouth. I was quite shocked how much I enjoyed it because I had never
sucked a cock before in my life. I could see that she was impressed with my efforts. I was told to
stand up, and bend over to touch me toes, as I did so, she unzipped me and began to tease my hole
woth the strap on, then she pushed it in. Slowley in and out, holding my hips as she thrust harder and
harder. After 30 seconds I came inside the catsuit. She laughed and told me to lick up the mess I had
made.
After I had done that she told me it was time for bed. I was to wear a pink satin nightdress.
The next morning she (Jane) woke me around 8.30, I washed and puy on the clothes she had laid out
for me. Pink knickers, pink bra, jeans and a top. As we ate breakfast she told me that this was the
start of my new life. I was to throw out all my male clothes, shoes, aftershave etc. I was no longer to
live as a man. I was now Annabell, Annabell the sissy. I was sooo happy, Jane gave me what she
called big girls vitamins and I was to take them every morning. After breakfast I packed up all my
male clothes into bags, and put them into her car,then took them to a charity shop. It was then off to
the hair salon where I had extensions fitted and my hair coloured. It was now deep red and shoulder
length From there it was into a beutician where I had my eyebrows shaped, faulse nails put on
properly and botox injections, and my ears pierced. I was now begining to be really happy. This wasnt
some quick fix for me, this was for real. It was now well after 3 in the afternoon. Jane had one more
surprise for me, an appointment with her friend who was a cosmetic surgon. It was agreed between the
two of them that I should have breast implants, lipo suction on my thighs and hip and bum implants
asap. Things were happening to quick for me, I was worried. Jane had put my name down for the
operations, which were to take place on the friday, this was wednesday. I tried to tell her to wait but
she said she owned me now and I was her toy to do with as she pleased.

How an unknown online Mistress managed to sissy train me This sissy is writing this as an assignment for my Owner. To explain it to you my Mistress wants me to always refer to myself in the third person. This sissy found it odd at first but sissy training helped me realize the power of... 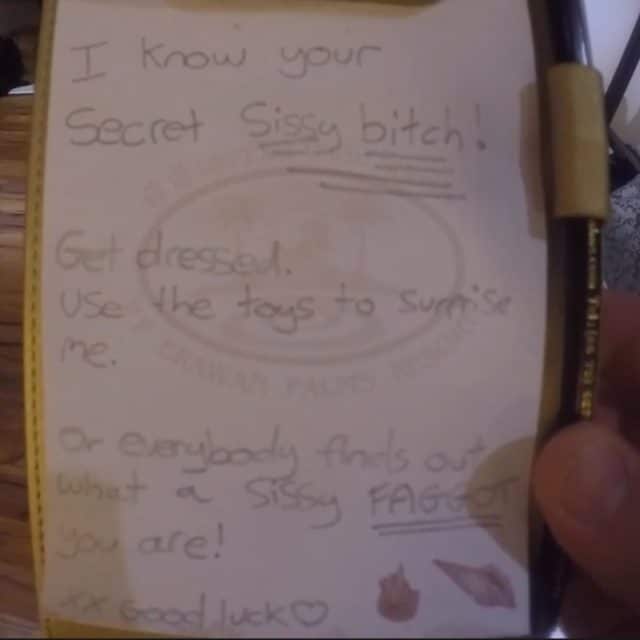 How an unknown online Mistress managed to sissy train me This sissy is writing this as an assignment for my Owner. To explain it to you my Mistress wants me to always refer to myself in the third person. This sissy found it odd at first but sissy training helped...

×
Subtotal
Proceed to Checkout
Shipping & taxes calculated at checkout
We use cookies on this site for user experience: Find out more.